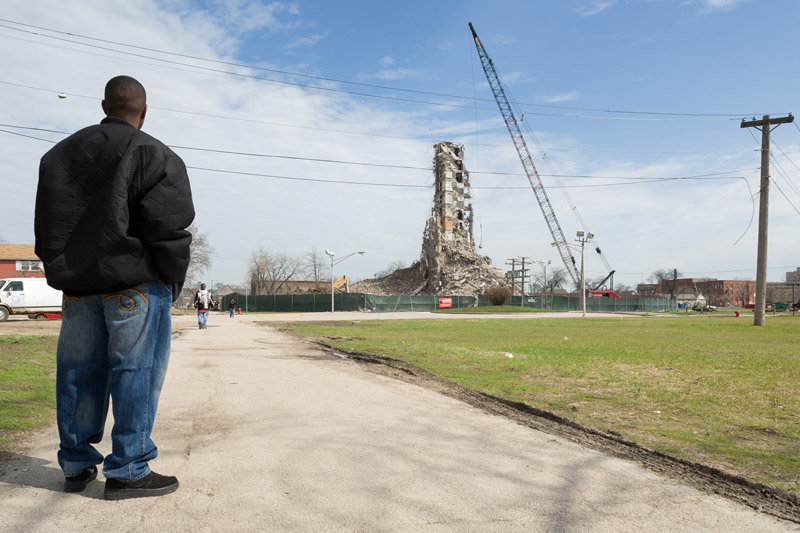 459 West Division: A Story in Images

Channeling Chicago’s complicated history, the title for the 2019 edition of the Chicago Architecture Biennial is …and other such stories. Landon Bone Baker explored the theme of Appearances and Erasures (“Explores sites of memory and the politics of remembering and/or forgetting in contested spaces, considering space as a marker of past and present social imaginaries, visible or otherwise”) with our community partner and lifelong Cabrini resident Raymond Shaq McDonald at the important site of former and current public housing at 459 West Division on the Near North Side of Chicago. Shaq, who was in high school at the time of documentary filming of 70 Acres, provided insight into the changing landscape of the area and the impacts of demolishing the high rises. Led by LBBA, the talk and tour at 459 W Division acknowledged the difficult history of the site, with a focus on learning from our past and connecting with our neighbors. 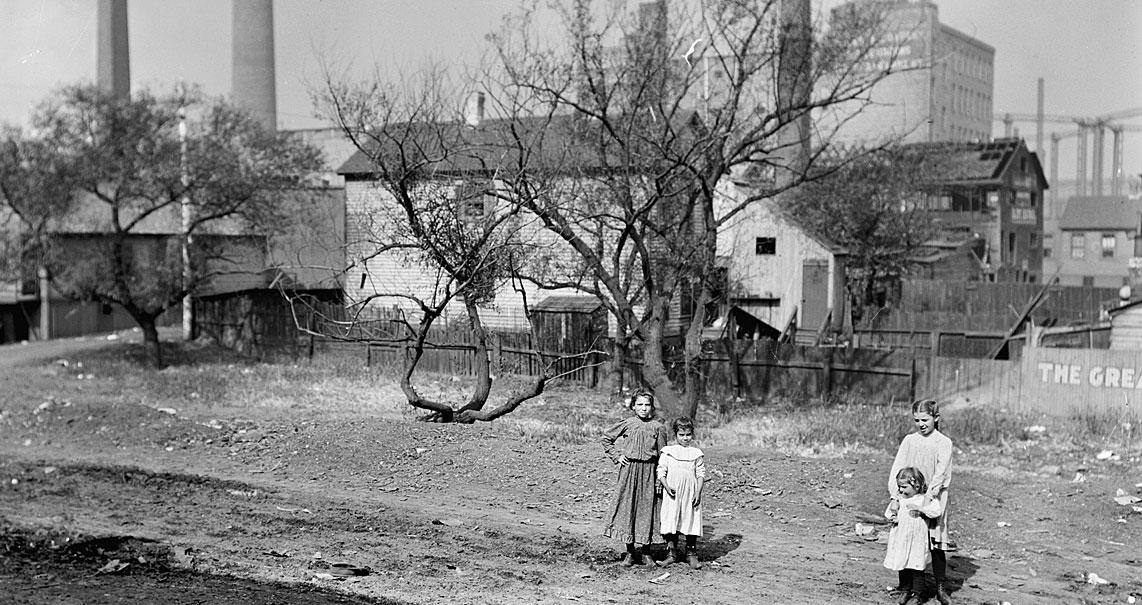 The neighborhood called Parkside of Old Town was originally known as Little Hell, a name coined when the industry, coal plants, and factories dominating the area cast an eerie glow in the sky during operations. This area was originally settled by German immigrants in the mid-19th Century who were later replaced by Irish and Swedish immigrants, followed by Sicilians. Little Hell was leveled by the Great Chicago Fire in 1871 and was hastily rebuilt as crude tenement housing. Following population and poverty growth, Sicilian gang and Irish mafia activity expanded, causing the Oak Street/Cleveland Avenue intersection to be dubbed “Death Corner.” In the 1940s, the area became known as Little Sicily. 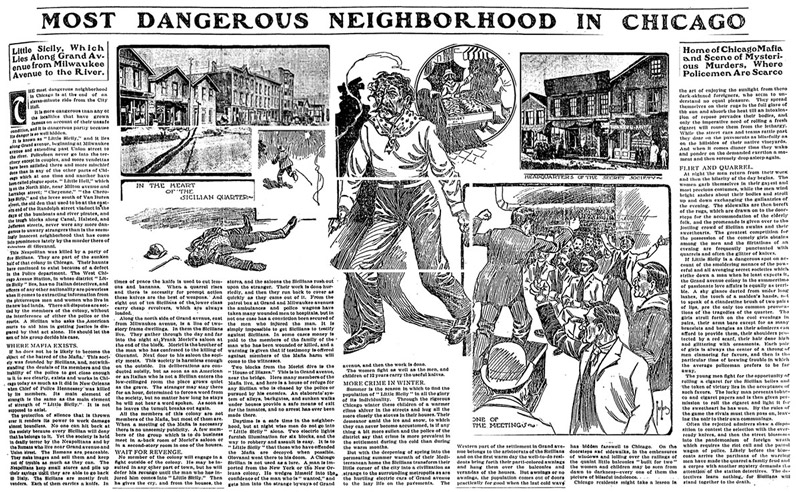 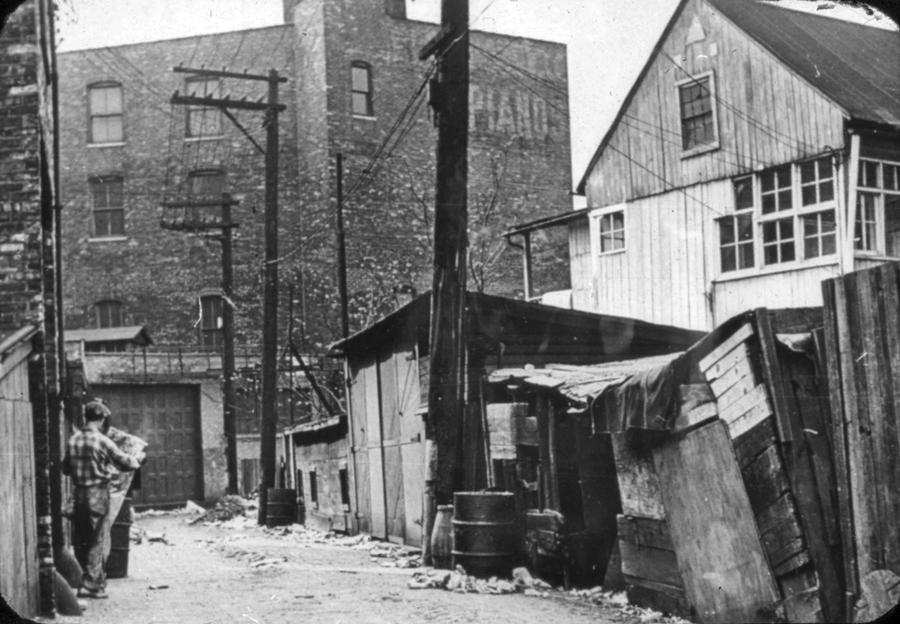 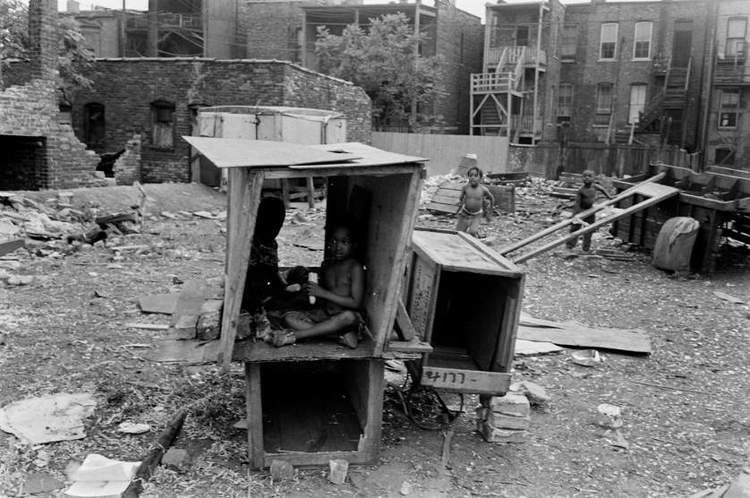 African Americans began migrating to Little Hell around this time due to a lack of affordable neighborhoods that would accept them. Then, in 1937, the Chicago Housing Authority was created and shortly after, most of Little Sicily was demolished to make way for the Frances Cabrini Homes, 54 two-story rowhouses which are still standing along Chicago Avenue. In the mid-1900s, the white and red brick mid-rise and high-rise buildings were built, creating a total of 3,600 subsidized housing units in the area known as Cabrini Green. The new buildings created a close-knit community within the predominately African American community. However, over the years, crime and neglect resulted in deplorable living conditions and distrust between residents. Cabrini Green became one of the CHA’s most infamous public housing projects in which residents were physically and psychologically cut off from the city. In the 1960s-1970s, the projects became more violent as gangs flourished in the vacuum left by the lack of building management and maintenance services. The 1980s-1990s saw an even greater uptick in drug and gang violence, punctuated by the brutal murder of Dantrell Davis. Despite conflicting public opinion, the CHA began closing and demolishing the Cabrini Green Homes in 1995, displacing over 3,000 residents. 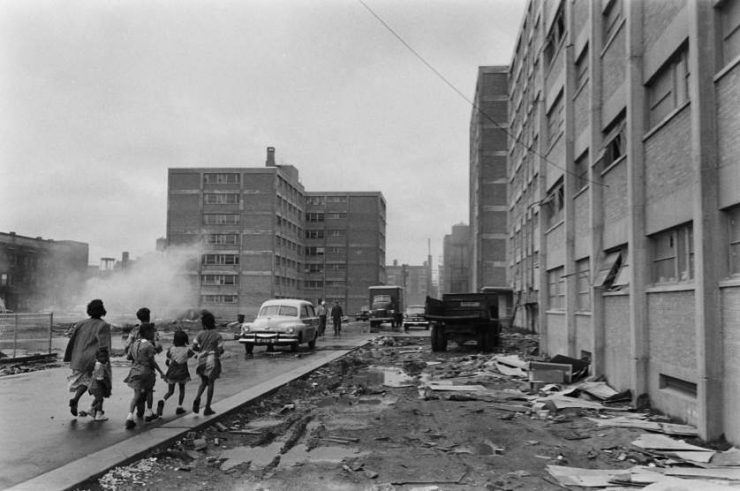 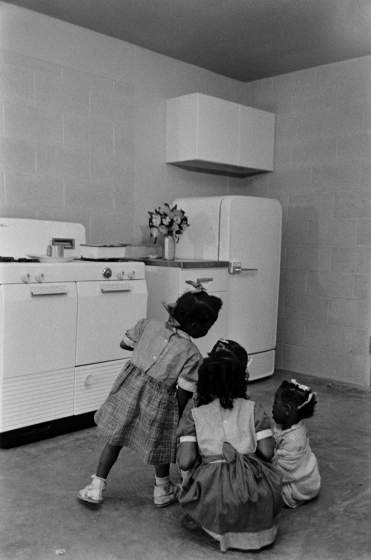 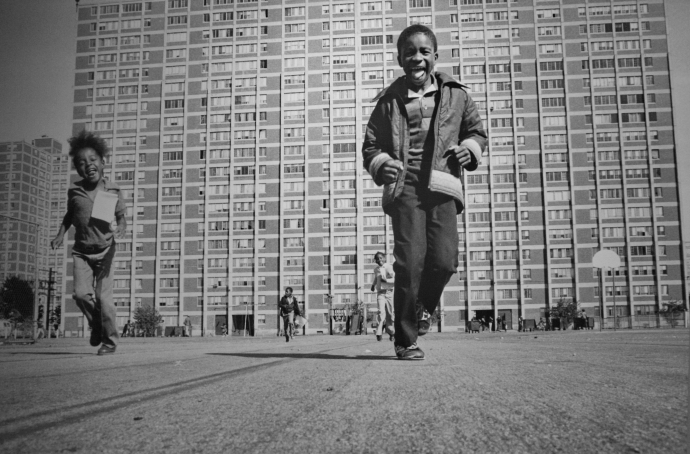 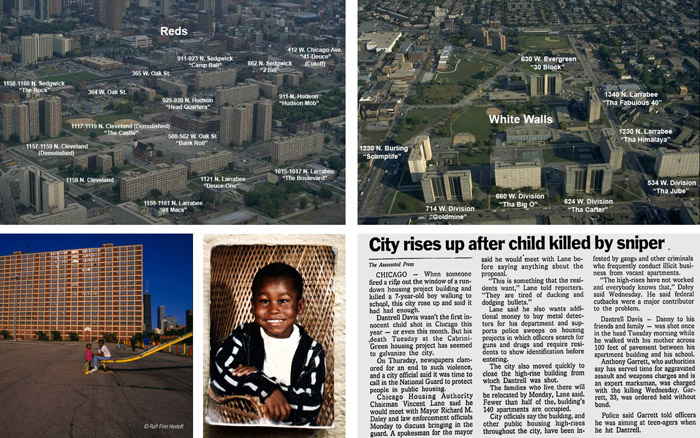 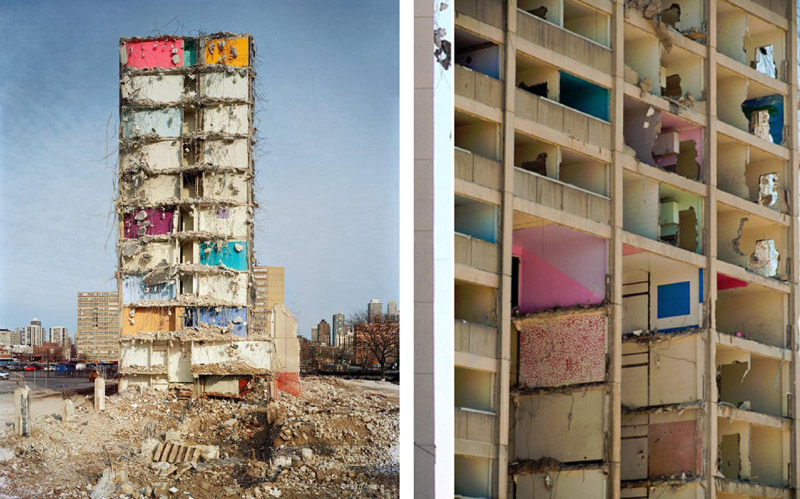 In 2006, Holsten Development began the process of redeveloping Cabrini Extension North as a part of CHA’s Plan for Transformation. Terrace 459 at Parkside of Old Town is the 12th building in the mixed-income development. The Local Advisory Council of Cabrini Residents participated in the development, creating a more inclusive environment within the shifting urban fabric of the neighborhood. While mid-century American public housing projects like Cabrini-Green are notorious for their austere and generic towers, Terrace 459 acknowledges the difficult history of its location and presents a vibrant alternative future for community-knit affordable housing. The project team carefully navigated challenges including interfacing with multiple government agencies and funding programs while addressing accessibility, sustainability, urban conditions, and budget issues. Parkside sets a new paradigm for public housing based on lower-density development, greater income diversity among tenants, and vibrant amenities attracting residents across broad social and cultural demographics.

More information about Terrace 459 at Parkside of Old Town can be found here. 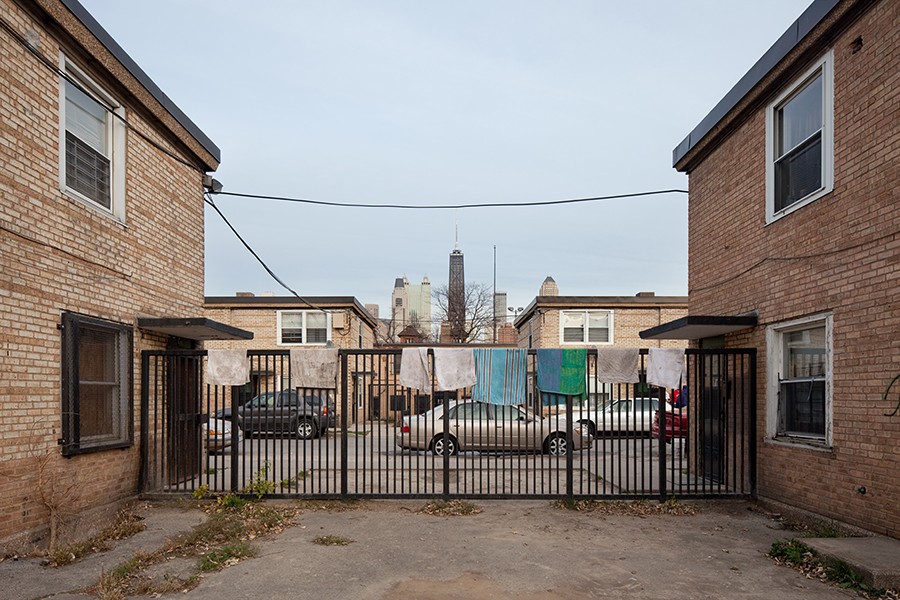 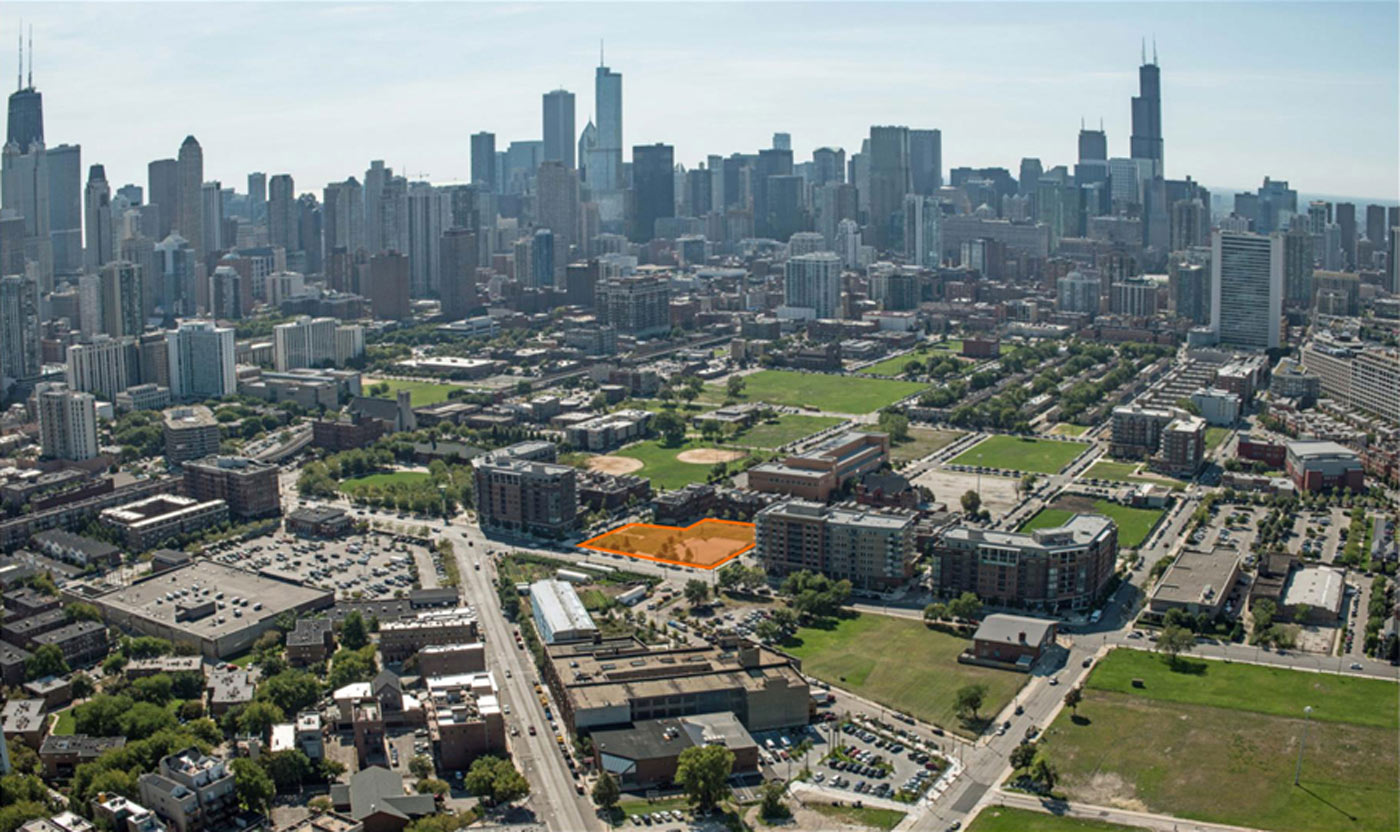